About 'Plants of the Qur’ān' & its Authors


About Author, Dr. Shahina A. Ghazanfar

Plants of the Qur’ān - History and Culture, published by Kew Publishing late 2020, investigates the etymology and history of the plants mentioned in the Holy Qur’ān.


It illustrates the historical and present cultural significance, traditional and present uses, and explores the context in which plants are mentioned in the text of the Qur’ān.


Several plants are mentioned in the Qur’ān that have a history of use as food, medicine or have value for a particular characteristic they hold.


Watch this short 5-min video to discover the backstories, inspiration and journey behind the book.
Please note: book cover and pages design has been changed since the video was produced.


Most of the plants mentioned in the Qur’ān can be identified to present day plants. A few, however, are difficult to name with certainty, and suggestions to their identity have been put forward with reference to the context in which they have been mentioned.

All of the approximately 22 plants mentioned in the Qur’ān are significant not only in that they are useful to everyday life, but because they have a historical, cultural and religious connotation. The very mention of some plants in the Qur’ān signifies their importance and relevance as they are known either for their use (such as date, onion, garlic, olive, grape, fig, pomegranate, lentil, ginger, mustard) or as a reference to their character or what they might denote (such as tamarisk, henna, sidr). Following research on the book , some new plants have been introduced and the book discusses about 30 different species , like the Ethiopian banana , Castor oil and Myrtle.

Through global climate change and human impact on the environment, natural habitats of many plant communities and animals are being lost or have changed with the result that many plant species can no longer survive in their native areas of distribution. The loss of a species means that there is also a loss of history and culture that is associated with it in its native environment. It is true that plants can be cultivated and saved from extinction, but the cultural history which a plant carries with it in its native habitat cannot be carried on through cultivation in another place. Plants of the Qur’ān also advocates the conservation and sustainable use of plants and their habitats as much as it stresses their research and investigation.

Independently of each other two people had the same thought – as small as a mustard seed that through friendship has grown and resulted in a collaboration of minds and skills. Dr Shahina Ghazanfar of the Royal Botanic Gardens Kew and Sue Wickison freelance Scientific Illustrator have pooled inspiration and resources to work together on a project to research and record in a book format the plant species that are mentioned in the Holy Qur’ān. There are several works written on the topic, but none that is a comprehensive illustrated collection of the plants.

This is a unique opportunity and a project that allows an historical document to be created. However small the plants are, it is a chance to highlight their valuable uses, whether as medicinal plants or food crops or just to be appreciated and enjoyed.

About Dr. Shahina A. Ghazanfar 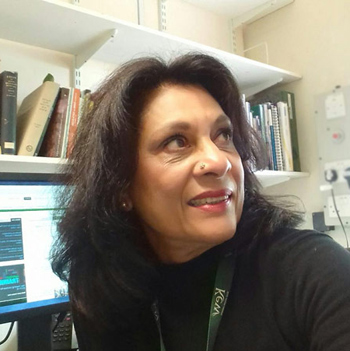 Shahina Ghazanfar was educated at the Universities of Punjab and Cambridge, and has been based at the Royal Botanic Gardens, Kew, since 2001. She is co-editor of the Flora of Tropical East Africa, a detailed taxonomic account of the roughly 12,000 plant species found in Uganda, Kenya, and Tanzania, for which she researched and wrote the account of the family Scrophulariaceae. She also co-organised, and edited the proceedings, of the 17th AETFAT Congress in Addis Ababa in 2003.

Her main areas of research are the systematics, vegetation, and biogeography of Oman, Arabia, and Pakistan. She has published a detailed account of the biochemistry and usage of Arabian medicinal plants and is the author of the first ever Flora of Oman. As an expert on the Arabian Peninsula, she is often consulted on its native flora, medicinal and perfume plants, and since 1992 has made numerous environmental assessments of development projects and proposed nature reserves in the region.

In addition to writing and editing scientific publications, she is an accomplished botanical artist who has illustrated most of her books and all her research papers. The British Council in Oman mounted a solo exhibition of her watercolours in 1993. She is on the editorial board of Systematics and Geography of Plants, and a member of the Linnean Society, AETFAT, IAPT, the Society for Arabian Studies, the Society of Economic Botany, and the Arabian Plant Specialist Group of the Species Survival Commission, IUCN.

Dr Ghazanfar started her career as a lecturer in botany at Kinnaire College, Lahore, and at SUNY Syracuse, before joining the National Herbarium in Islamabad as a herbarium curator and researcher on the Flora of Pakistan. For her doctoral research at Cambridge, she revised the genus Silene L. sections Siphonomorpha Otth. and Auriculatae (Boiss.) Schischk. She left the National Herbarium in 1983 to take up a lectureship at Bayero University, Nigeria, where as well as lecturing she was keeper of the botanical garden and founding curator of the university herbarium, which specialises in collections from northern Nigeria.

From 1987 until 1997, she was an associate professor at Sultan Qaboos University in Oman. There she created the country's second herbarium, housing some 4,000 accessioned specimens and a good collection of medicinal plants and lichens. She also gave curatorial assistance to its principal herbarium, the National Herbarium of Oman, which is located in the Museum of Natural History, and edited newsletters for the Horticultural Association of Oman and the Historical Association of Oman.

From 1997 to 1999, she was funded by Cambridge University and DAAD to study the systematics, ethnobotany, and conservation status of the flora of the Arabian Peninsula. Afterwards she went to Fiji as a lecturer and researcher at the University of the South Pacific in Suva, and while there she conducted a vegetation survey of the smaller islands. She returned to Cambridge in 2001 as an Academic visitor to the Department of Plant Sciences at its Downing site and later that year she took up her current position at Kew.

Sue Wickison was born and brought up in Sierra Leone, West Africa. Her passion for natural history was nurtured by her father, a teacher, amateur botanist and artist who used to take her on expeditions locating, identifying and collecting botanical specimens.

Sue was awarded a Winston Churchill Fellowship to travel to the Solomon Islands to collect orchids for Kew Gardens and to illustrate the publications “Orchids of the Solomon Islands” and “Orchids of Vanuatu” both by P.J.Cribb & B.A.Lewis. In recognition of Sue’s work , she was lucky to have a new species she found named after her – Coelogyne susanae.

Sue has travelled extensively and worked on illustrated books for the Agricultural and Forestry departments in the Solomon Islands,
Nepal and Vanuatu. She has also produced over 50 natural history stamp designs for several countries in the Pacific, including New Zealand.

For the last four years Sue has been travelling gathering information on the 'Plants of the Holy Qur’ān' project within the UAE from the Empty Quarter to Abu Dhabi and into the deserts in Sharjah to remote farms in search of the correct plants. She has also travelled to Oman and up into the remote mountain areas where plants have been grown in the same way for centuries. Sue has also sourced material from the UK , Australia, Fiji and New Zealand.

Read more about the artist


Copyright © Sue Wickison; "Plants of the Qur’ān", All Rights Reserved